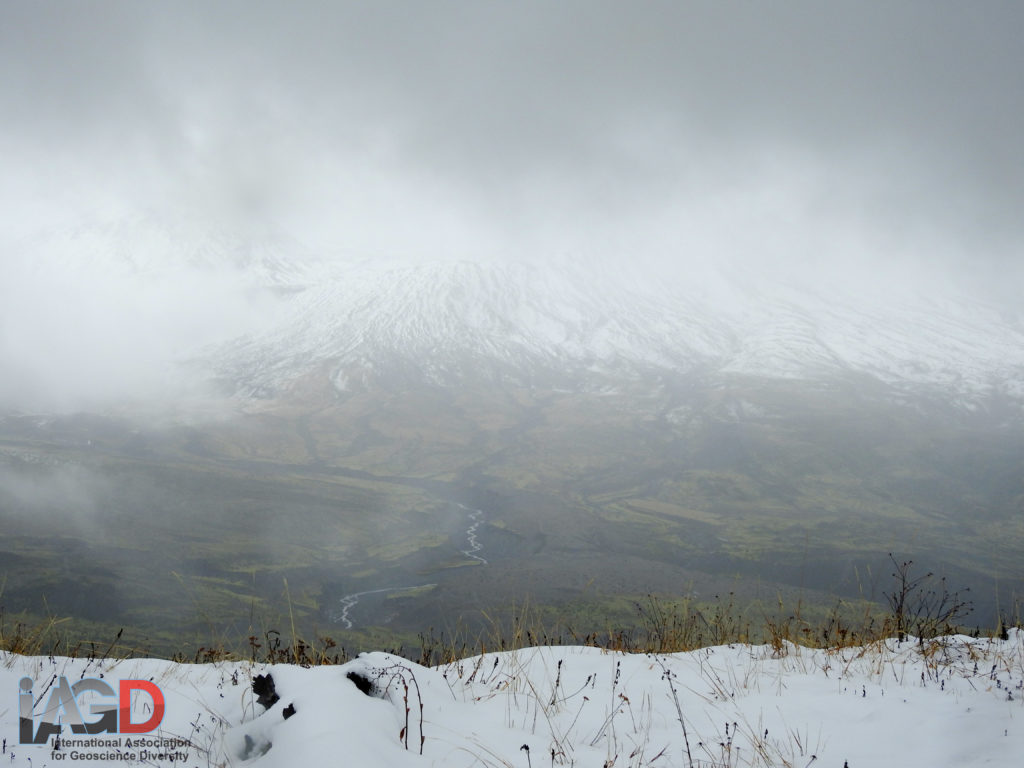 A partial view of Mt. St. Helens from Johnston Observatory during the 2018 GSA/IAGD Accessible field trip.

Mount St. Helens, one of ~15 major volcanic edifices along the Cascade Range, erupted in spectacular fashion on the morning of May 18th, 1980. On that fateful day, an earthquake started a chain-reaction that lead to the north-facing flank to collapse in the world’s largest documented landslide from which a lateral blast of ash and pyroclastic flows traveled. The eruption caused major change to the landscape north of the edifice and cost 57 people their lives. In just 37 years, the landscape has changed in measurable ways, the most prominent of which is the relatively fast-paced return of vegetation in the blast zone – as a group of  geoscientists representing many institutions in North America and Europe discovered on an IAGD-led accessible field trip one rainy but otherwise fun day.

Organized by Drs. Chris Atchison (U. of Cincinnati) and Steven Whitmeyer (James Madison U.) and graduate students Anita Marshall (U. of South Florida) and Ivan Carabajal (U. of Cincinnati), this was no ordinary geology field trip. Offered by the IAGD based on an NSF-funded GEOPATH project, this event demonstrated the results of a two-year project that tested the effectiveness of audiovisual digital communications system to facilitate on-site access for individuals with physical disabilities. For more information on this innovation, see Thatcher et al (2017) GSA abstract (https://tinyurl.com/IAGDWireless). 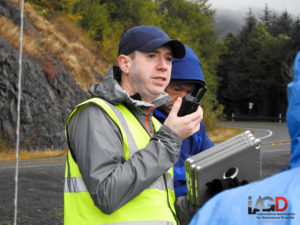 Dr. Trevor Collins instructing participants on how to use the wireless communication system and digital tablets. The hand radio is being used include students who were working from a nearby vehicle in the conversation.

At the first stop on this field adventure, participants including yours truly, visited an outcrop along the Spirit Lake Highway opposite the Mt. St. Helens Forest Learning Center. At this outcrop, lava flows and intrusions ancestral to the Mount St. Helens edifice are exposed. Using the GEOPATH-supported communication system, we split into about three working-groups to tackle different aspects of the geology as presented in the outcrop: lithology, field relations and alteration. 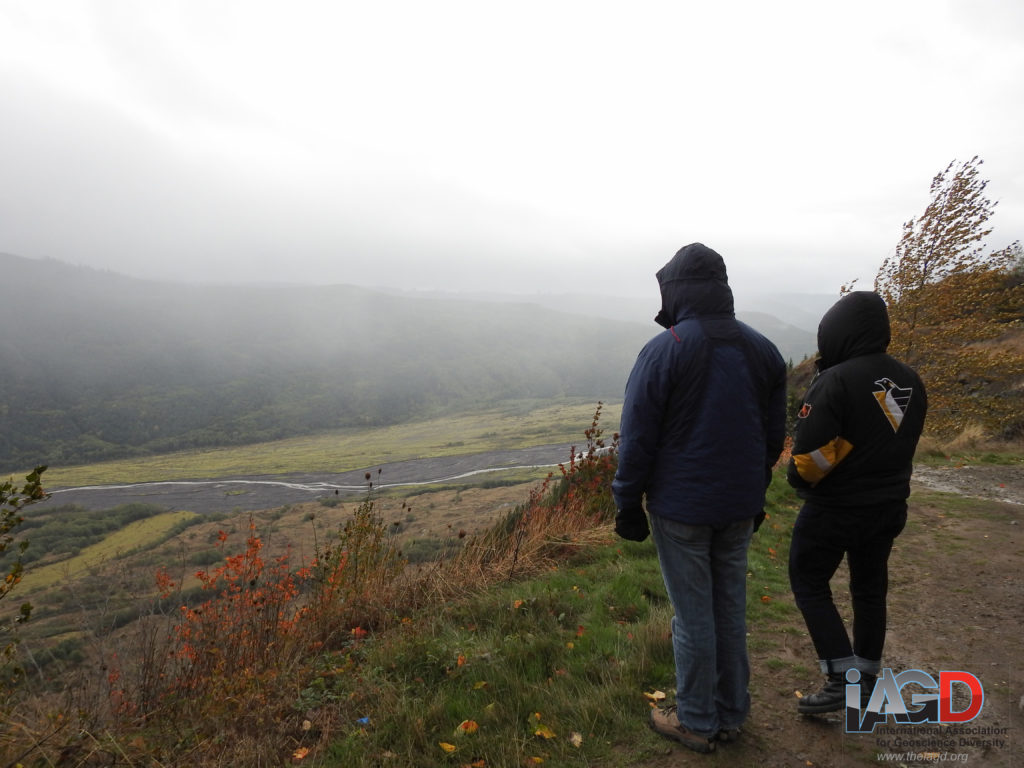 Stop 1 included a view of the Toutle River Valley from an overlook near the Mount St. Helens Forest Learning Center. The valley contains  a significant amount of debris from the 1980 eruption. 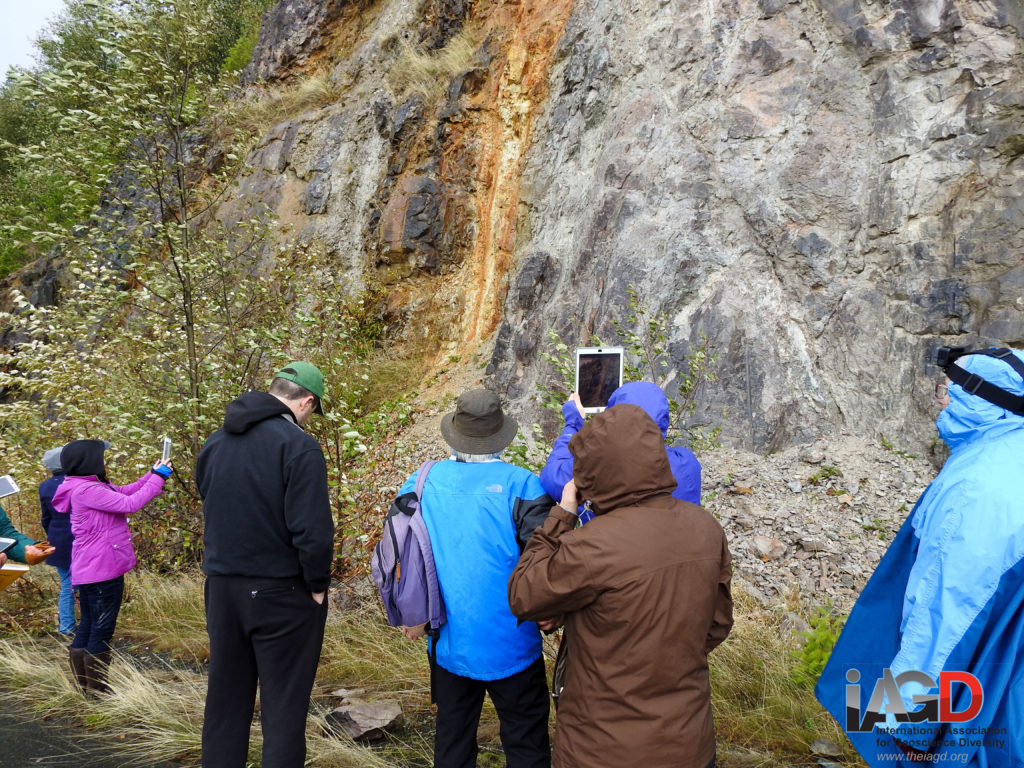 The road cut at Stop 1. Participants broke into groups to study the outcrop, while sending photos and videos back to participants working from vehicles due to the inclement weather. 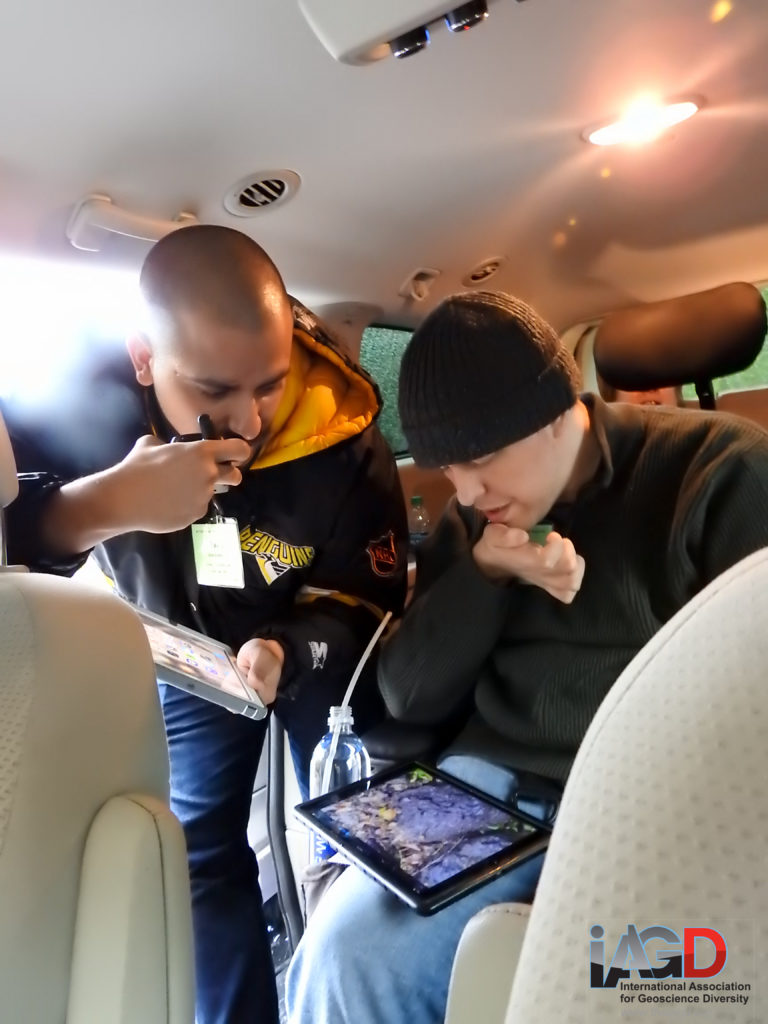 Graduate student Ivan Carabajal collaborates with a field trip participant to interpret photos and videos sent back from the outcrop in real time.

After spending time at the outcrop and having excellent discussions about the geology presented at the outcrop, we continued on the Spirit Lake Highway and entered the blast zone where the devastation to the pre-1980 forest was evident, but also the significant degree to which plant life has rebounded 37 years after the eruption. We entered the Mount St. Helens National Volcanic Monument and then made our way to the Coldwater Lake boat launch area where the same GEOPATH-supported communications system was used as we worked to understand via field evidence the sequence of events that lead to landscape changes both during and after the May 18th eruption. 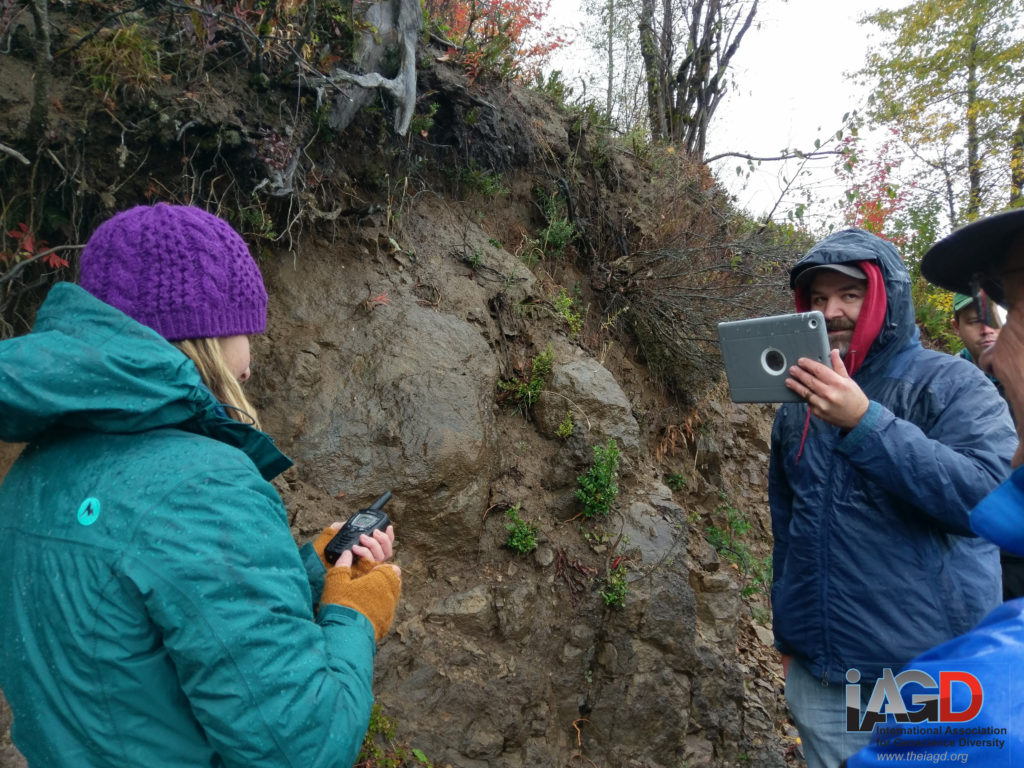 The portable wireless network was relocated tot the aptly named Coldwater Lake for Stop two, where participants continued remote collaborations with participants working from vehicles within line of sight of the to outcrop.

The final stop on our journey was the Johnston Ridge Observatory, named after David A. Johnston, a USGS geologist who was killed on the ridge that now bears his name 8 km north of the volcano that fateful morning. There, we watched a film in the Observatory auditorium that discussed the events that occurred related to that fateful eruption and debriefed. Dr. Cole Kingsbury is a post-doctoral scholar in geochemistry at the University of Pretoria, South Africa.

Accessible field trips coordinated by the IAGD are 100% donor and grant supported so there is no cost to participants. For more information about sponsoring a future trip, please contact us at info@theIAGD.org