Part of the Chancellor’s Excellence Awards program, the Graduate Student Leadership Award honors graduate students who have made outstanding contributions to the campus or the community through their involvement in campus activities, community services and leadership-development opportunities. 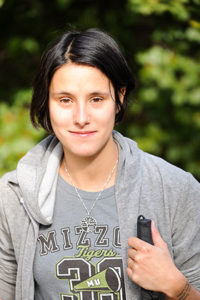 In his letter of nomination for the award, MU ADA Coordinator Lee Henson wrote:

“One of Gina’s greatest strengths is her willingness to communicate — directly, candidly and positively. For many students with and without disabilities, she exemplifies what many others can do, if only they would. Since beginning the science-education program, she has continued to lose her eyesight. Despite her vision loss, she is involved in numerous campus and outreach activities related to her graduate program, including several projects aimed at increasing accessibility to science classes for students with a disabilities at MU. Perhaps no other student has done more on behalf of positive change for students with disabilities at MU than Gina. She helped found MU Student Exceptions (MUSE), an advocacy group for students with disabilities. She also helped to found, and is now president of, both the Sight Club and the MU chapter of Delta Alpha Pi national honorary group for postsecondary students with disabilities. In addition to these activities Gina also serves as a member of the One Mizzou Task Force. Gina is an exceptional communicator, unflinchingly positive, while never failing to be a realist and an a high achiever who is well liked by students, faculty and staff.”

Learn more about Gina, IAGD member, at the University of Missouri press release.